Dynamite Announces Death to the Army of Darkness Series

Dynamite has announced a new Army of Darkness comic book series featuring 6 different versions of Ash. As if one wasn’t enough!

November 21, Mt. Laurel, NJ: Ash Williams is back in a new series in February from Dynamite – but wait, there are more Ash Williams?!

The “Chosen One” has had enough of that nonsense, but gets way more than he bargained for when Ashley Joanna Williams suddenly splinters into multiple differing clones. And each is packing the same over the top personality as the original! Writer Ryan Parrott (Mighty Morphin Power Rangers, Batman: Gates of Gotham) has concocted this comedy-horror extravaganza alongside artist Jacob Edgar (Savage Tales: Red Sonja). Their groovy crew is completed with colorist Kike J. Díaz (Sherlock Frankenstein, Ether) and letterer Hassan Otsmane-Elhaou (Red Sonja, Peter Cannon: Thunderbolt) – who must have cloned himself to double as one of the best letterers and an Eisner-winning critic! 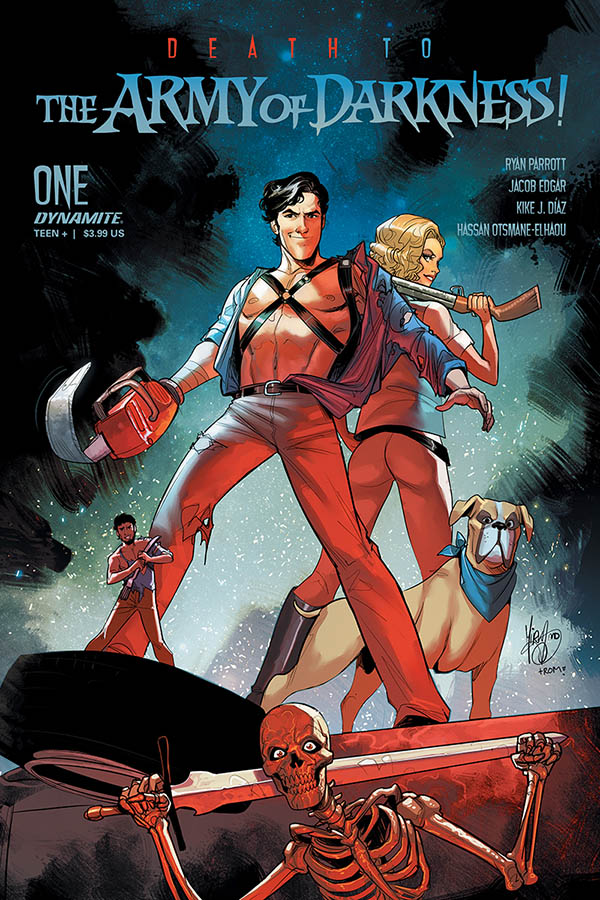 Picking up just barely after the legendary Army of Darkness film, the big mixup is of course due to some classic bad translation of the Necronomicon. Introducing the cast… Ash is joined by the personification of his feminine side with Ashley Williams, the erratic Lil’ Ash, Dash aka Doggie Ash, the cynical and morose Skeleton Ash and Chainy – Ash’s now sentient chainsaw! 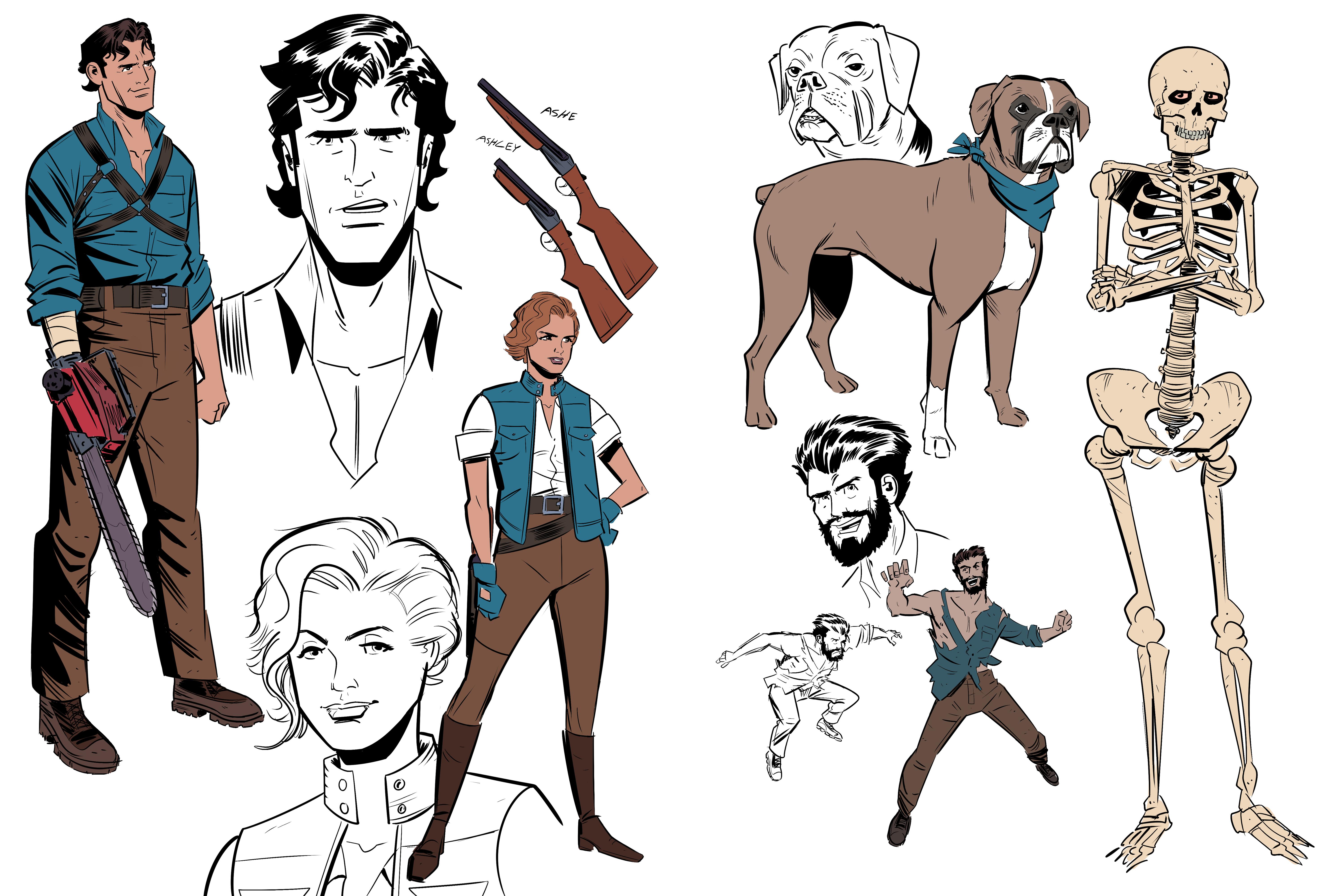 Together they must travel through time to Ancient Egypt and prevent the Necronomicon from ever being written in the first place. Along the way, can Ash solve his split personality predicament – and how would the others feel about that? Could one of the party members be hiding something? Fans will just have to read to find out! 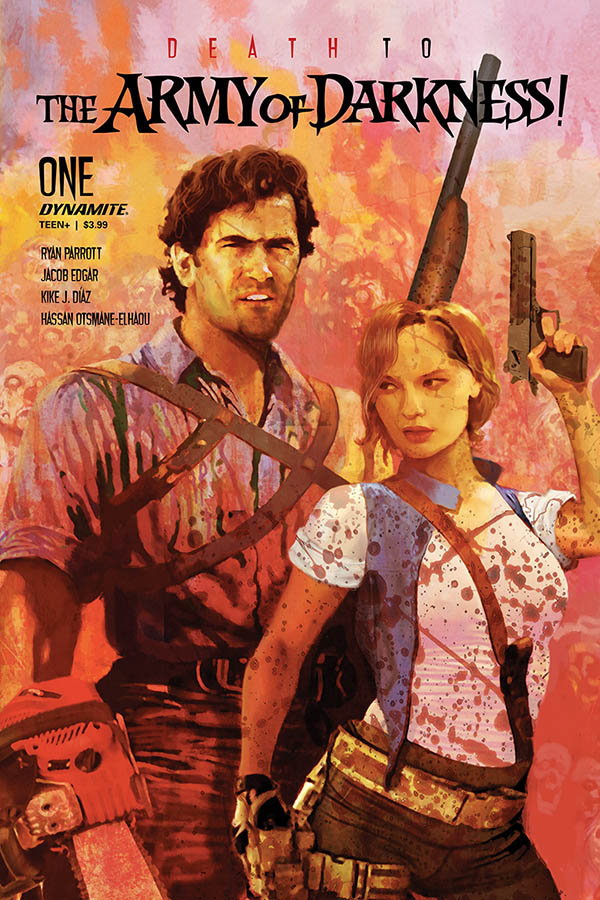 Writer Ryan Parrott is no stranger to “team books,” as the architect of the critically acclaimed Power Rangers franchise in comics today. After spearheading the ongoing spinoff series alongside his mentor Kyle Higgins, he’s leveled up to the flagship.

Parrott shared, “Ash is just such a unique character to get to write, a self-serving braggart who always stumbles backward into being a hero. And I’m really excited about the story we’re telling. This series is wacky fun and really digs into Deadite mythology. It’s full of blood, sweat, and boomsticks… so I really hope fans come along for the ride.” 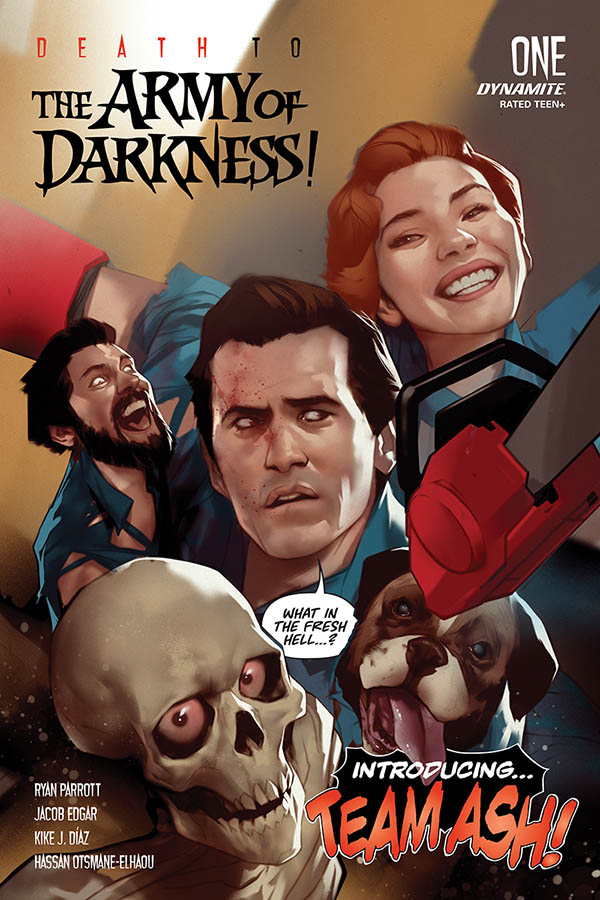 Artist Jacob Edgar said, “Army of Darkness has pretty much everything you’d want to draw in a comic book, and Ryan is playing to ALL of that with his scripts. Ash is a ton of fun as a character, trying to translate his expressiveness and… unique brand of heroism to the page. There’s quite a legacy for us to live up to on a property like this, with all the films/TV/comics that have come before, but I think we’re bringing something fresh and really special!”

“This series is a love story dedicated to the concept of beating the ever-living hell out of evil demons and breaking as many things as possible and pouring buckets of monster blood on everything!,” added editor Nate Cosby. “And I think Ryan, Jacob, Kike and Hassan should be ashamed of themselves. Buy it in February!”

To celebrate all these fun new characters, Dynamite has enlisted its own wacky crew of cover artists. Ben Oliver (Vengeance of Vampirella, American Carnage) leads the pack, perfectly capturing the attitudes of each of Ash’s new compatriots. The “Zombie King” himself, Arthur Suydam (DCeased, Marvel Zombies) is a natural addition to the team. Mirka Andolfo (Unnatural, Catwoman) brings her signature style. Fans can also be on the lookout for a special Valentine’s variant by Sebastián Píriz and a remastered Icon incentive cover featuring J. Scott Campbell’s piece from Dynamite’s first-ever Army of Darkness comic book 15 years ago! 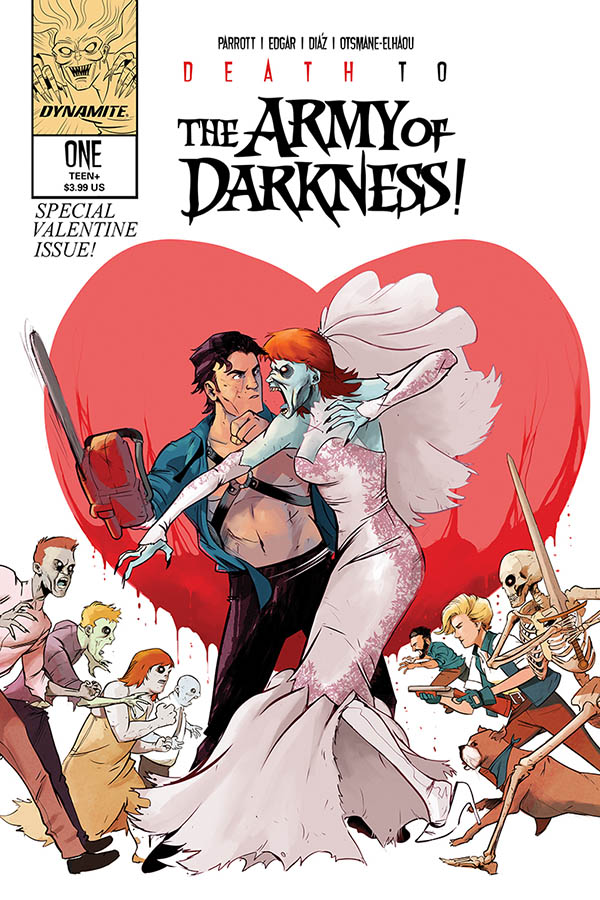 See More Death to the Army of Darkness